An independent water treatment company based in Rochdale aims to double its turnover in the next five years.

Salt Separation Services – which sells water purification technology to the cruise ship industry, the offshore oil and gas sector and the Royal Navy – has a turnover of around £8.4 million sterling, employs 81 people and has contracts in place for the next decade.

Director Sarah Ashworth says the company is on track to continue to grow and reach £15million in revenue over the next five years, a far cry from its humble beginnings 32 years ago, when Founded by Stephen Grindrod and Kevin Shackleton.

Sarah became the company’s director when her father, Stephen, tragically died in a motorcycle accident in 2019. Kevin’s son, Daniel, took over the reins when Kevin retired in 2007.

She said: “We’ve had a turbulent few years, but we’re trying to change our culture. We launched a career development program and an apprenticeship program using Rochdale Training and the local college.

“We had an estimated turnover of £8.4 million last year and we hope to double in size over the next five years. We just grew and grew over the past 32 years.

Sarah was eight months pregnant with her daughter when she became a director and says she learned a lot during this time in her life.

“I enrolled in several leadership courses. In a way, being a director is like being a mother; I used the same skills that I found easy to replicate in the workplace,” she explained. “I consider myself the mother of the company.”

The apprenticeship scheme was launched in April 2022, with at least one apprentice employed in each department. Sarah hopes to hire two more welder apprentices and plans to consider a graduate program after a major site renovation.

She continued: “Before this year we had a couple, but we noticed a big driver was succession planning. As the market is very specialized and bespoke, we thought, why not have apprentices in each department up to specialist level.

“We have a major site renovation this year; we will move things for more space and build a new workshop. 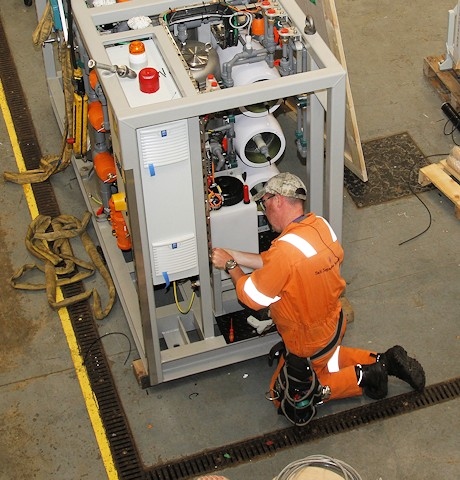 The company recently hosted a successful open house for family and friends on July’s National Manufacturing Day. On this day, manufacturers across the UK open their doors to give local communities the opportunity to see potential careers in the industry.

Due to safety concerns and the nature of Salt Separation Services’ business, staff have held an open house for family and friends instead of an open house to the public.

Sarah added: “The evening went very well. It was nice to see the staff and their family members.

“It’s a family business and we try to keep that element as one of our core values. We want everyone to have a close relationship.

Salt Separation Services works in the offshore oil and gas, marine (both naval and commercial) and industrial markets, where it removes salt from water by reverse osmosis and nanofiltration. This ensures that the water is suitable for drinking, process and industrial purposes. Their types of plants can purify tap water, even produce fresh water from sea water on ships.

The company has previously been named one of Greater Manchester’s 100 most innovative small businesses, while Stephen and Daniel were named co-winners of Businessman of the Year at the 2012 Rochdale Business Awards.